Semax is a russian nootropic medicine which is administered as a nasal spray. It is an analogue of the naturally occuring peptide ACTH, with longer lasting and more potent effects on the brain. 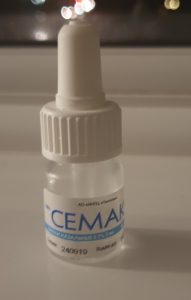 A small vial of semax 0.1% with a nasal dropper attached

Semax increases the amount of bioavailable brain derived neurotrophic growth factor (BDNF) in the brain. BDNF is associated with neurogenesis, so Semax is used mainly to improve the ability to learn.

In practice, Semax has the effect of allowing you to focus on tasks for longer, and with greater focus.

In animal trials, Semax was given to rodents. They experienced a surge in the amount of BDNF, and their dopaminergic and serotonergic systems were activated1https://link.springer.com/article/10.1007/s11064-005-8826-8. Rodents are often used as ‘model organisms’ because they share many of our neurochemical pathways and so the effects are thought to be replicable in humans.

During these same trials, Semax was also shown to increase the effects of D-Amphetamine, and being neuroprotective it follows that it should also decrease the negative side effects of ADHD medicines more generally.

Semax is available in Russia, Ukraine and other eastern bloc nations but it is not approved for use by the FDA in the United States, or in the UK. Even so, it has a high safety profile and has been researched extensively since its creation in the 1960s in Russian labs.

It is included on the list of ‘Vital and Essential Drugs’ by the Russian Federation after being shown to be one of the most effective post-stroke remedies. Although it has many purported effects and benefits besides ->

Where to Buy Semax? 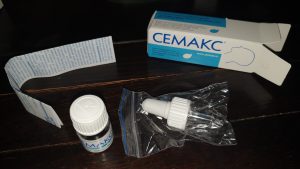 The Semax we ordered from Cosmic Nootropic. It comes with a small glass nasal dropper, instructions for use and the licensed packaging.

Semax can degrade if not shipped at the correct temperatures. We liked Cosmic Nootropic’s Semax solution because of its reliability, they typically ship their orders from their Russian warehouses promptly, and with a non-harmful preservative to keep it in good shape. It arrives well within the time-frame for the peptide to remain in great condition too!

For more information check out their page, although we will be posting a review soon- watch this space!

Treats stroke, especially ischemic (smaller scale) strokes1https://www.ncbi.nlm.nih.gov/pubmed/10358912 and the possible follow up strokes that can sometimes accompany it

Antioxidant – decreases the deleterious effects of oxidative stress in the brain

Focusing – especially when it comes to repetitive tasks that demand attention, for example compiling sources for footnotes. No, we’re not hinting at anything2Maybe we are..

Cemakc comes in 0.1% and 3% variants. The former variant is better for r for treating ADHD, ADH, SCT, CDD, because it is focusing, and more generally it can be used as a nootropic medicine.

The 1% formulation is more appropriate for people recovering from stroke or who otherwise have suffered or are suffering from brain injury-following neurosurgery for example.

Semax is administered as 3 droplets in each nostril for a total of 6 droplets, 3-4 times a day.

Taking semax alone is enough, it covers a lot of bases because it activitng the dopaminergic and serotonergic systems, and increases BDNF levels.

If you take amphetamines already for ADH, then pairing them with semax will lead to synergistic benefits31.

Some people claim that Semax makes them more anxious and reduces quality of sleep. Anxiolytics like l-theanine, valerian extract, and the peptide Selank are all good choices if this is the case for you.

More footnotes are available on the websites listed in our additional resources. For semax, we only picked a few to cover our main bases, partly because a lot of the literature covering Semax is in Russian.

Could I get some SEMAX experiences up in here? from Nootropics

What SEMAX did for me from Nootropics